The UK market has drifted a bit lower during July which has, for the most part, been a quiet time in terms of fundamental news flow. Geopolitical events dominated instead, with rising tensions in both the Ukraine and the Middle East.

Just in the last few days, however, company results for the first half of 2014 have begun to come in. In general, the macro-economic trends companies saw in the first quarter are continuing along similar lines. Emerging economies are continuing to grow, but at a lower rate, while developed economies are recovering in a patchy fashion. So far, updates from Evenlode holdings have generally reassured (other than Glaxo – see below) and, encouragingly, dividend growth remains healthy. A +28% increase in IG Group’s dividend this week has been a particular highlight. IG is a classic asset-light business model, and with little requirement for capital to drive future growth it can distribute much of its annual cash flow to shareholders. The shares currently yield slightly more than 5%.

Also of note has been the on-going steady performance from our holdings in the software and data analytics industry. Sage, Microsoft, SAP and Reed have all updated the market in the last few days and continue to migrate their embedded customer bases towards a more cloud-orientated (or in Reed’s case digital-orientated) business model. Here are a few examples of the progress being made:

In the midst of this transition they are also generating high and growing cash flows, and continue to grow dividends. The most recent dividend increases have been +6% for Sage, +22% for Microsoft, +18% for SAP and +5% for Reed.

A notable ‘lowlight’ on the results front so far has been Glaxosmithkline. Already in the doghouse this year, the company reported weak second quarter results with sales from two of its older therapies falling more than expected. Our view on Glaxo remains as discussed in recent commentaries. We think the company will ultimately emerge from current difficulties as a stronger, more focused group. Its pipeline of new therapies is healthy and a growing portion of the group’s sales (more than 50% once the Novartis transaction closes) will come from its stable, market leading consumer healthcare and vaccine franchises. These fundamentals should drive improving cash flow and dividends per share over the coming decade. The current dividend yield is more than 5.5%.

One feature of recent results worth mentioning is the very considerable impact that the pound’s recent strength has had on many UK listed companies operating in global industries, such as healthcare and consumer staples stocks. The impact has been two fold. First, the simple translation impact of reporting results in sterling but earning profits in other currencies. Second, companies with a disproportionate share of their cost base in the UK (such as Glaxo’s R & D activities) have also faced a margin headwind. The effect of translating global currencies back into sterling for UK listed multinationals is in many cases impacting earnings by -5% to -10% (or more) this year, following a significant headwind last year too. This is depressing earnings and inflating current multiple-based valuations, making these investments look less attractive to UK investors in the short-term.

We are monitoring the currency impact on our global businesses closely (and particularly the ability of these companies to pay and grow their sterling dividends). However, we are also keeping an eye on the long-term opportunity here. There is no doubt that the current strength of the UK economy and the pound have made these multinational companies more unfashionable than they would be otherwise, and many are trading on attractive dividend yields as a result. Meanwhile, they continue to invest through the currency headwinds, laying down the tracks for longer term growth. It would be naive to expect this global potential (or the currency environment) to unfurl in a steady straight line over coming years, but it’s important not to lose site of the huge opportunity many have in front of them. This is how Jean-Marc Huet from Unilever recently put it:

I’m often asked, how do we manage through periods of currency volatility? And it’s worth just repeating a couple of key points. Firstly, we manage our businesses in local currencies. Secondly, we do not cut back on investments to try to protect in-year hard currency reported earnings. That would just simply sacrifice the longer term for the short term.

Elsewhere something that is keeping us very busy (though so far mainly in terms of investment research rather than portfolio activity) are some chinks of light emerging amongst the smaller companies in our investable universe. The chart below shows the significant relative performance of the FTSE Small Cap and FTSE Mid Cap indices over the last five years relative to the FTSE 100, and an inflection point that incurred in March – since when smaller companies have been doing less well: 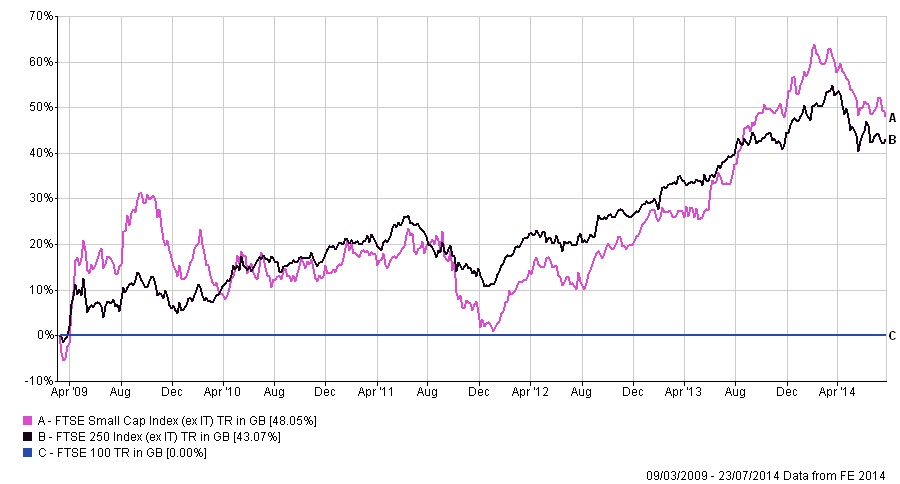 There is not the same ubiquitous love for the smaller company sector as there was a few months ago. As a result, those releasing statements that disappoint the market are being punished quite heavily. We mentioned in the July factsheet that we have added significantly to Domino Printing this month. The shares fell on results with weaker than expected guidance – now back to a 4% dividend yield and an attractive cash flow valuation. Domino is an excellent little franchise with a high degree of recurring revenue and healthy long-term growth prospects. Elsewhere, there are several stocks that we have sold over the last year where recent underperformance means we are quite close to getting involved again. There are others stocks we follow where the scale of their re-rating over the last few years has been so significant that there is a way to go before they tick our valuation and dividend boxes. We will keep you updated on developments in this area.

That’s all from me this month. Enjoy the rest of your summer and Ben and I look forward to updating you on the Evenlode portfolio as the second half of the year progresses.

Please note, these views represent the personal opinions of Hugh Yarrow as at 24th July 2014 and do not constitute investment advice.