In last month’s global investment view we took a look at some of the Evenlode Global Income fund’s biggest portfolio moves of 2019. As we sit at the start of 2020 it is a natural point to look at what went well and less well during the year just gone from a performance point of view. As the fund celebrated its second birthday during the year, we have a slightly longer-term context into which to sit the performance history, although we hasten to add that two years is still a short time in the world of equity investing.

Thinking about equity investing as a long-term endeavour is central to the Evenlode investment approach, and we nudge the portfolio incrementally to reflect the evolving risk environment. Most often we are reflecting the changing long-term value that the market presents us with, but sometimes fundamental changes are made. For example, at the current time AB Inbev’s large debt position (following its acquisition of SAB Miller) is limiting its maximum position size, but it is now on an improving trajectory. Should the company come near to its more moderately leveraged target then we will reassess the risk picture.

We have had requests from clients to delve into the drivers of performance on a regular basis and so we will include a review in our investment views as each quarter passes, alongside our usual thoughts on happenings at our investee companies and in the market.

The Evenlode Global Income fund’s performance during 2019 is summarised as follows (all data from FE Analytics in sterling):

So the fund outperformed both its official benchmark, the MSCI World and its peer group. However, it was a game of two halves (or two thirds/one third), as outperformance to the end of August reversed somewhat in the remainder of the year. We’ll look at the final quarter of the year in more detail below.

Which companies contributed in 2019?

Western Union tops the bill of contributors as the money transfer firm enjoyed a rebound from its lacklustre performance in previous years. The company has shown that its traditional consumer-to-consumer business is not dead but can in fact be evolved into the new digital era. It is using its core platform of compliance and settlement capabilities and store network (all of which are hard to replicate) as a basis for its digital customer-facing solutions, and as a business-to-business proposition, allowing banks to outsource to them or acting as the network for business transactions themselves. Western Union are the largest non-bank cross border payments provider for businesses.

We discussed PepsiCo in the last investment view, where we responded to the price increase by reducing the position size. Thomson Reuters was exited from the portfolio during the year, as the very strong price performance left the valuation at a place that more than recognised the qualities of the business. The catalyst was the Refinitiv financial data services business being first separated out into a joint venture with Blackstone, and then sold on to the London Stock Exchange.

Euronext is a multi-country financial exchanges operator in western Europe. It has been successfully executing a strategy of diversifying organically and by acquisition, activity that appears to have been applauded by the market itself. It has taken on debt to finance its latest acquisition, and whilst there is an intention to pay this down out of its strong cash flows, we have limited the maximum position size to reflect the higher financial risk. Our maximum position size framework is a fundamental risk control mechanism, which sets an upper limit to the exposure to any one company based on the business risks that we perceive in that firm.

Negatively, bottom of the pile is French advertising business Publicis. The advertising world has been grappling with the twin challenges of a structural shift in advertising to online, and the cyclical oscillations of client marketing budgets. In the case of Publicis and WPP they have also been losing North American business to their rivals from across the pond, Interpublic and Omnicom. This trend is showing some signs of stabilising. We think the sector has the capacity to move onwards into the new digital age, but so far the market has not agreed. The valuations look compelling whilst we wait, but we do reflect the apparent risks in limited maximum position sizes.

Hugo Boss has not had a disastrous time, but sales growth has been anaemic due partly to geopolitical matters such as the situation in Hong Kong, and partly due to a strategic retreat from the wholesale market in the US. The firm is also investing capital expenditure in store refits, which is constraining free cash flow in the near term. We think the firm has a good heritage and appeal to older and younger consumers alike through its different offerings but is clearly cyclical, and with free cash flow constrained again we limit the maximum position size to reflect the risks.

German industrial-consumer conglomerate Henkel saw a modest price decline. This is not disastrous in absolute terms, but in the context of market performance in the 20s and the firm being amongst the largest positions in the portfolio, the position has not done much for the fund’s relative performance. Cyclical pressures at Henkel have weighted on the share price, but we believe that there is long term quality available for an attractive valuation.

There are many ways to look at the performance of sectors within the portfolio. At its most basic we can look at the contribution of the sector to the overall performance of the portfolio, but we can also look at the performance against the fund’s benchmark to get an insight into what’s driving relative performance. Both are summarised in the table below which extracts sectors of interest and is ordered by contribution to portfolio return (the full table can be found in the end notes*). All data is from Factset and please note that the figures are before any charges and underlying trading costs are accounted for, which is why the total figures are different from those above.

At the top of the list of contributors to absolute performance is consumer non-durables, also known as the fast-moving consumer goods sector. However, when comparing to the MSCI World index it was also the top detractor from relative performance as the holdings in the fund underperformed those in the broader index for that sector.

Next up is technology services, which largely translates as software. Some companies in the technology sector have performed very strongly, and again the sector detracted from relative performance, albeit only slightly.

Health technology is third on the list of contributors, which includes pharmaceuticals and medical devices. Here the portfolio companies outperformed the benchmark in the healthcare sector and so there was a positive contribution relative to the MSCI World.

The only ‘sector’ to negatively contribute was transportation, where we use the inverted commas because it is only one firm, C H Robinson, in the portfolio which declined in value.

The biggest sector contributor to relative performance was finance, which is interesting as it is not a big sector for us at Evenlode. Despite the sector as a whole performing quite well in the year, our three holdings were standout performers.

Perhaps also interesting, the next largest contributor to relative performance was one to which the fund has no exposure, the energy minerals sector. Comprising the oil majors which didn’t have a very good time in 2019 at least from a market price perspective, it goes to show relative performance is also about ‘the notes you don’t play’ (to misuse the words of jazz great Miles Davis).

The fourth quarter of 2019 was a period of weaker performance, as the fund’s price declined versus a moderate increase for the broader market.

Underperformance was driven by the consumer goods sector, with beer giant AB Inbev and diversified consumer firm Unilever the biggest detractors. In both cases we remain confident in the long-term investment proposition, although in the short term both businesses are experiencing slowing growth, particularly in developing markets. Both companies have excellent exposure to fast growing emerging markets, which should contribute to faster growth over time. In our view, the share price declines have led to the businesses trading at attractive valuations, and so we maintain the positions within the portfolio.

Underperformance of some holdings gives us an opportunity to nudge up the positions at more attractive valuations, and outperformance can lead to nudging down to manage valuation risk, all other things being equal. How long the recent trends from the fourth quarter will continue we don’t know, but by managing the portfolio in this way we hope to balance taking opportunities with long term fundamental risk management, and we look forward to applying the process in 2020. 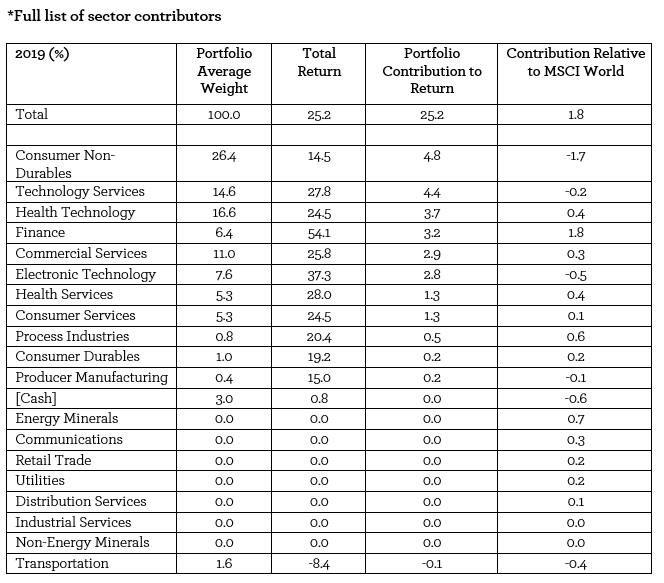 Please note, these views represent the opinions of Ben Peters and Chris Elliott as at 7th January 2020 and do not constitute investment advice.

Past performance is not a guide to future returns. The value of investments and any income will fluctuate (this may partly be the result of exchange rate fluctuations) and investors may not get back the full amount invested. Performance figures for all share classes can be found in the relevant Key Investor Information Document. Fund performance figures are shown in Pound Sterling, inclusive of reinvested income and net of the ongoing charges and portfolio transaction costs to 31st December 2019 unless otherwise stated. The figures do not reflect the entry charge paid by individual investors. The standardised past performance information is updated on a quarterly basis.