After a year of strong outperformance in 2015, the EU referendum has created a conundrum for UK Small and Mid Cap (“SMID”) investors, which is our focus as fund managers, leaving us with a dilemma as to what the best approach might be as we move forward into unchartered waters post the BREXIT vote. Having a reasonable weighting in domestic cyclicals when the UK was enjoying one of the best growth rates in the developed world was an easy call. The BREXIT vote wrong-footed financial markets causing a sharp devaluation of Sterling and an equity market sell-off. Once the implications of the weaker pound sunk in, large caps, which are dominated by overseas earners outperformed significantly (see chart), whilst the sell-off in domestic cyclicals, which are more prevalent in the SMID segment, accelerated. This rapid and sustained sell-off in the immediate aftermath of the vote made it difficult and indeed foolhardy to contemplate re-balancing portfolios. 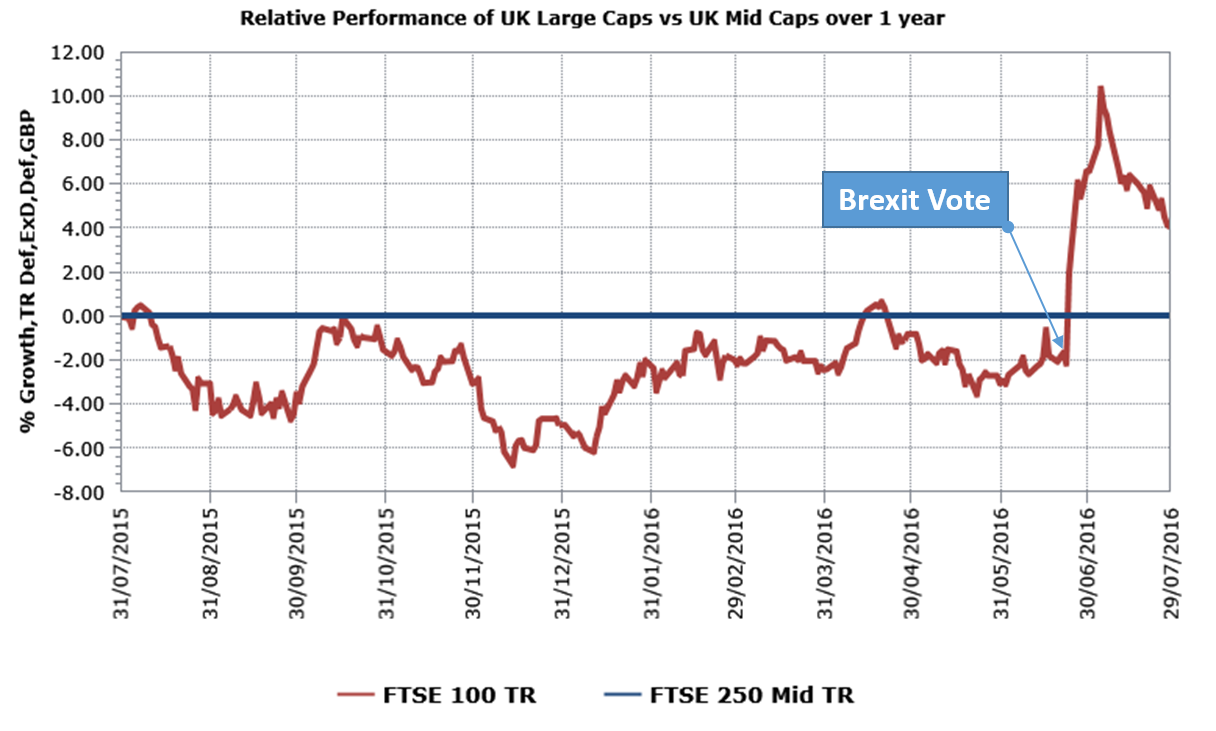 Now the dust has settled, SMID investors need to work out the implications of BREXIT and what the effects of monetary stimulus and any possible government fiscal policy response might be. Are domestic cyclicals oversold or now just dangerous value traps, or is the route to future outperformance to be found in exporters, overseas earners and structural growth stocks?

The initial PMI survey in the wake of the Referendum pointed to a sharp slowdown in the economy, but surveys since then particularly of consumer spending and indeed trading updates from retailers like Topps Tiles and SCS Upholstery have been more reassuring. Anecdotal evidence from our regular meetings with company management teams, across a broad variety of sectors, suggest that the domestic economy was already slowing in Q2 as businesses put investment decisions on ice ahead of the referendum. After the vote, with the swift resolution of the Tory party leadership calming nerves, we got the sense of some activity recommencing, however most managers pointed out that with BREXIT being so closely followed by the holiday season it won’t be until the autumn until we get a clear sense of the economy’s direction.

From a purely practical point of view, trade with the EU member states shouldn’t be affected by the vote, if at all, until the terms of our exit are agreed. In the meantime our exporters will benefit from a more competitive currency. However, given the UK’s propensity to import a high proportion of its consumer goods, the sharp deterioration of Sterling will either squeeze consumers’ disposable income or retailers’ margins or most probably both, notwithstanding reports of consumer spending holding up well in the aftermath of the vote. Another obvious area at risk is inward investment into the UK as a route to accessing the wider EU market, particularly in areas like Financial Services, which represent a large part of UK’s GDP, until our future trading relationship with the EU is clarified, which will take some time.

The markets knee-jerk reaction to BREXIT seemed to price in Armageddon for UK cyclicals, the rational response being to average down in over-sold stocks rather than trying to re-balance portfolios to reduce domestic exposure. However the more settled political landscape and the acknowledgement that our relations with the EU will not change for the immediate future have enabled share prices to tentatively start to recover. Whilst we don’t know what the government response will be, some form of fiscal stimulation by accelerating infrastructure projects together with more incentives at the bottom end of the housing market to encourage construction activity could be envisaged, enabling further recovery amongst housing related stocks. Meanwhile the Bank of England has reacted quickly halving interest rates from an already meaningless fraction and turning the printing press back on, two measures which are likely to squeeze up asset prices in an indiscriminate manner creating more inflationary pressure, rather than stimulate the real economy. All told we imagine this will help over-sold cyclicals to recover further and give SMID investors the opportunity to review their strategy going forwards from a more palatable position.

The beauty of SMID investing is the breadth of the universe and the wide number of stocks and different investment themes they play to, from domestic cyclicals, which we have debated exhaustively, to overseas earners, to consumer defensives and structural growth stocks all across a broad range of sectors. With a disciplined investment process it is possible to filter this universe effectively and tailor a portfolio to suit the macro outlook. The heightened risk of inflation in the UK means finding companies with a competitive edge and pricing power will be more important. Years of poor productivity and offshoring have reduced our manufacturing base in the UK, but domestically based exporters should prove attractive when one can find them. Many of the UK quoted SMID industrials now are global businesses with a limited presence in the UK, but their overseas profits will now translate into higher Sterling earnings. One area where the UK excels is technology, witness the recent bid for ARM in Cambridge. This area combines a number of attractive themes, namely pricing power thanks to investment in IP, export opportunities and structural growth, that is businesses which can grow notwithstanding the economic outlook because they play to changes in the way business is conducted. Here we are drawn to internet “picks and shovels” businesses in the SMID segment, which enable business to be conducted more efficiently over the internet, by providing identity registration and verification services online, secure payment processing, internet marketing campaigns and many other internet and mobile engagement services. Large caps may have enjoyed a one-off surge in performance thanks to a currency adjustment and the “Bond Proxies” will be helped further by monetary loosening despite their seemingly high valuations, but in the light of BREXIT we believe a heavier focus on structural opportunities should serve the SMID investor well in the long term.