Investors should always keep in mind that the most important metric is not the returns achieved but the returns weighed against the risks incurred. Ultimately, nothing should be more important to investors than the ability to sleep soundly at night.Seth Klarman

2017 was, in the end, quite a benign year for global stock markets. Share price volatility remained at low levels relative  to long-term history, and the broad aggregates recorded good gains. Though geopolitical uncertainties by no means disappeared, they were offset by an increasing sense that economic growth is accelerating in many parts of the world. Meanwhile, despite several central banks tightening monetary policy, interest rates remained very low in the context of long-term history, which also contributed to the friendly patchwork quilt that enfolded markets during the year.

Whilst investor sentiment en masse may not have reached levels of clamouring excitement, animal spirits have certainty risen. As a sign of the times, it’s been interesting to watch the odd pocket of financial markets (cryptocurrencies such as Bitcoin being the outstanding example) trace out hockey-stick price charts during the year. As boringly old-fashioned dividend growth investors, we do of course just observe this phenomenon quietly from afar!

During 2017, Evenlode rose +15.2% compared to a rise of 14.0% for both the IA UK All Companies sector and the UK market.* Strong cash generation was a theme for the year, with the aggregate portfolio posting free cash flow growth in the mid-teens as solid underlying growth and a tailwind from the weaker pound both helped. Many of the best performing holdings demonstrated particularly strong ‘cash compounding’ characteristics over the year (e.g. Diageo, Microsoft, Sage Group, Jardine Lloyd Thompson, Victrex, Johnson & Johnson, Ashmore and PageGroup).

With interest rates low and corporate management feeling reasonably optimistic, merger and acquisition (M & A) activity was also a feature for both the wider market and the fund. Three Evenlode Income holdings were involved in takeover talks during the year, which helped performance:

1) Unilever: approached by Kraft Heinz in February, with management declining the offer and subsequently announcing new financial guidance for both 2017 and the medium-term.

2) WS Atkins: management recommended an offer from Canadian peer SNC-Lavalin and the company was taken over in July.

3) Aveva: the company announced an agreed deal with French peer Schneider Electric in September. The transaction was structured as a reverse takeover, and an enlarged Aveva will remain listed on the UK stockmarket.

This trend has continued into 2018 with two of the fund’s media holdings - Informa and UBM - announcing talks relating to a potential transaction.

In terms of negative performers, Evenlode Income’s most significant laggards during 2017 were DMGT and WPP. As discussed over the last few months, we think both DMGT and WPP offer the patient investor highly cash generative business models with good longer-term prospects and potential for dividend growth. However, recent difficulties have rendered their shares unfashionable in a market in which many other companies are enjoying a fairer operational wind. As a result, these two companies currently offer starting dividend yields of 3.7% and 4.8% respectively**.

Broadening The Portfolio Out

Turning to portfolio changes, we have again (as with 2016) broadened the portfolio out as opportunities came along. New positions during the year included Novartis, Smith & Nephew, WPP, UBM, Howden Joinery, Moneysupermarket and Cisco Systems. On the sell-side, the main reductions of note were exits from Mitie (for balance sheet reasons) and RWS Holdings (for valuation reasons).

Over the last two years as a whole, we have added 14 new positions to the fund and exited six positions, bringing the total number of holdings up from 32 in January 2016 to 40 today. This is a reasonably high level of activity for us, and reflects our desire to ‘refresh’ the portfolio as the opportunity set shifts, managing both valuation and fundamental risk along the way.

There’s been plenty to talk about in the first few weeks of 2018, with recent US government actions and speeches keeping the newswires particularly busy (US tax reforms, US unilateralism, the weakening dollar etc.). Company results season is also now in full swing***. Peering through the January noise and into the mists of the rest of the year and beyond, a couple of key thoughts spring to mind.

More positive sentiment towards the economy and investment markets may ostensibly be a ‘good’ thing, but as the saying goes, you can pay a high price for a cheerful consensus - positive sentiment can result in higher valuations and therefore less potential for future return. In this context we remain committed to biasing the portfolio to the best valuation opportunities we see in the Evenlode investable universe whilst also keeping the risk dials turned down.

In terms of valuation management , the direction of the portfolio is by its nature difficult to predict, and we invest in companies one-at-a-time, so generalisation is not always easy. However, it is worth noting that going back two years   ago (a long time in financial markets!) sentiment was desperately negative towards more ‘pro-cyclical’ shares ( i.e. companies that benefit the most from economic expansion). This provided several interesting opportunities for the  fund in companies such as Aveva, Victrex, Spectris and Rotork. The pendulum of sentiment has swung some way since then, and if this trend continues the incremental opportunities may move a little towards more ‘stable’ stocks. Another trend we saw in 2017 were some opportunities in high quality UK domestic exposed companies (Howden Joinery and Moneysupermarket both being examples). Given the portfolio’s high level of geographical diversification (less than 25% of underlying cash flows come from the UK economy), we will remain open to more opportunities in this area if they emerge.

On the fundamental front, we continue to manage the aggregate portfolio’s balance sheet strength particularly carefully. The chart below shows how this trend has developed over the last few years versus the UK market. Maintaining this balance sheet strength remains key to us given how important this factor is (along with cash generation) in terms of long-term dividend sustainability: 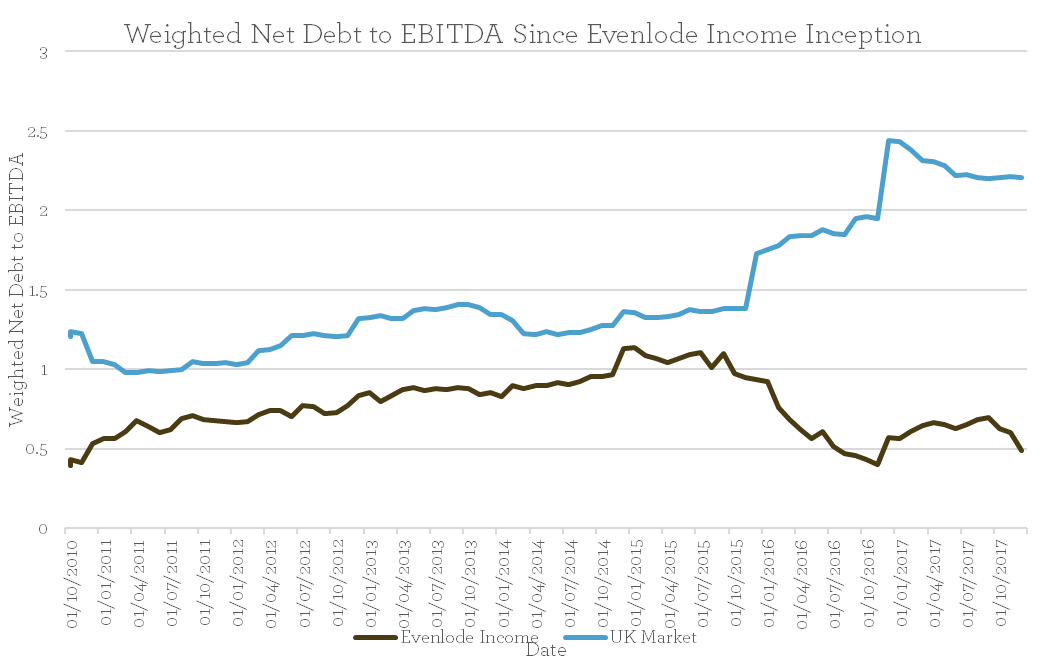 Another area we are giving a lot of thought to is the ways in which the old fashioned dividend growth investor can defend against some of the disruptive trends at work in the world today. Down the ages there has always been a  tendency towards technological exceptionalism and I’m therefore reluctant to over-egg the amount of innovation at play in our current era (I’m sure the canals felt like just as big a deal as social media and search engines when they came along in the 19th Century!). However, it is fair to say that the trends towards digitalisation in many different sectors of the global economy are very powerful ones and provide both challenge and opportunity. We continue to think that companies that enjoy a strong ‘economic moat’ are particularly well placed to defend against these challenges (high levels of customer loyalty, high switching costs, embedded distribution, network effects etc.). However, this alone is   not enough. Even companies in boring-old sectors such as consumer staples need to make sure they continue to adapt and defend their ‘moats’ as new channels emerge in the digital world, millennials change consumption patterns etc. A willingness to invest and evolve remains key: only the paranoid survive as Intel’s legendary CEO Andy Grove once put it.

If a company can not only defend against these trends successfully, but also actively convert them into growth and efficiency opportunities, all the better. We believe many of the holdings in the Evenlode Income fund can, thanks to the effective harnessing of digital information, data analytics, and digital sales and marketing capabilities. The fund’s software and media holdings are particularly good examples.

With animal spirits rising and sentiment starting the year buoyant, our investment process and commitment to through-cycle risk management may appear unnecessarily austere. However, as Seth Klarman points out in the quote  at the top of this piece, finding opportunities that offer reasonable returns with relatively limited levels of risk is always key for the long-term investor (uncertainties can emerge from blue skies just as easily as dark ones). To  this end, we will continue to plough our usual furrow. I remain encouraged that the fund’s 3.3% dividend yield is provided by market leading businesses that we think look well placed to grow their free cash flows and dividends at a real rate over time.

So a familiar message to start the year, and I look forward to updating you on the fund as 2018 progresses.

Please note, these views represent the opinions of Hugh Yarrow as at 26th January 2018 and do not constitute investment advice.

***Many positions within the fund have updated the market over the last month, including particularly strong updates from PageGroup and Aveva and several reassuring statements elsewhere. Two companies whose share prices have fallen in January are worth a mention too. The first is Sage, the fund’s third largest position, whose shares fell -8% following a first quarter trading update. Growth remains good, full year guidance has been reiterated and medium-term growth guidance upgraded. However, first quarter sales growth fell short of some analyst expectations. EMIS, a much smaller position, saw shares fall -17% following a pre-close trading update. As with Sage, EMIS’s underlying trading has been fine, but management identified some customer services issues that will lead to penalty payments. It is always disappointing when share prices of holdings fall and/or companies experience operational issues. However, Sage and EMIS are software companies that enjoy strong market positions with highly cash generative, repeat-purchase business models. We think both are well placed over the longer term and are attractively valued on a cash-flow basis.