Insofar as we have had a view on the Yen this year – we have been wrong… Rather than stability around 110/US$ as has been the recent norm it has moved decisively-: first below 120; then past 125; and most recently 130. On a real effective exchange rate, adjusted for inflation, the yen is at 40-year lows. 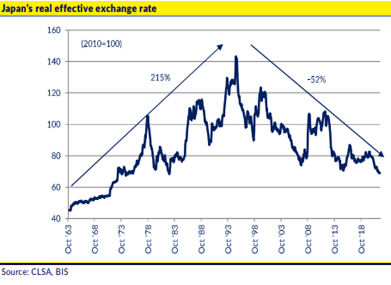 The story this year has been all about monetary policy differentials. Global inflationary pressures, which are currently less potent in Japan, have caused bond yields to rise globally. Whereas the US Federal Reserve has announced the beginning of Quantitative Tightening the Bank of Japan (BOJ) has continued to pursue its ultra-easy monetary policy and remains a buyer of Japanese bonds in unlimited quantities to sustain yields at 25bp. This recalls the Soros theory that argues that relative monetary policy will drive changes in the exchange rate. Japan is printing and the US is not. 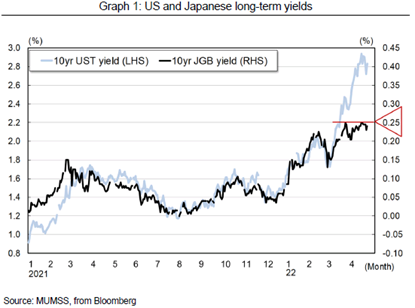 We do not agree with the view that it is commodities that are driving the exchange rate. Whilst the trade surplus is under some short-term pressure from a higher oil price the overall current account is still in rude health. The Current Account surplus recently stood at +3.5% of GDP. Japan also holds Y1,300 trillion in foreign assets – with an accumulated net surplus of 80% of GDP - any short run issues are easily financeable. 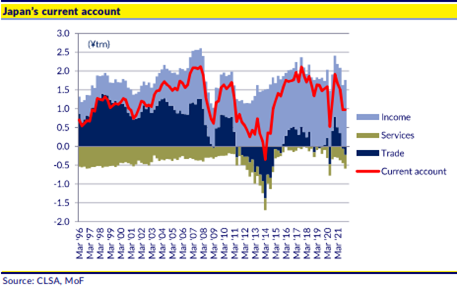 Inflation in Japan has remained low. Some of this though is technical caused by lower mobile tariffs over the last eighteen months, which will drop out shortly. The employment situation is not as tight in Japan as the USA. Most importantly deflationary mindsets are entrenched after >20 years of disinflation. The hope is that persistent, moderate inflation may encourage a mindset change. As Mr Kuroda has often said, gaging inflationary mindset changes is impossible. As Japan is likely to report only its fourth inflation print above 2% since 2000 in the next month, he regards this as ‘work in progress’. To his way of thinking importing some inflation via the weaker Yen may be a good thing.

Our process looks for meaningfully undervalued stocks with a catalyst. Applying this analytical lens to the Yen we can argue that the Yen is meaningfully undervalued. What then of a potential catalyst? Our starting point is not to forget that the Yen is ALREADY at the cheapest level for 40 years. It does not mean that the Yen cannot get cheaper, but we believe that a fundamental ‘intrinsic’ valuation of the Yen is substantially stronger than the current level. There are several potential catalysts that could change the story of a one-way weaker Yen -: policy settings; macroeconomics; and politics are three credible candidates.

The current trade looks like a “no brainer” to many traders. You are being paid to go short Yen and invest in Treasuries - virtually guaranteed a turn from the currency depreciating in the short run. This is a very popular trade with very extreme investor Yen short positions. So, imagine the situation if the Bank of Japan were to change their policy from yield curve control to allowing bond yields to rise. Mr Kuroda is due to retire next year and there could well be a desire to proclaim ‘Mission Accomplished’ before then. We remember in 1998 seeing the yen appreciate 25% against sterling without blinking. Many funds playing the “no brainer” did not survive…

If, as seems likely, the USA were to go into a recession then bond yields would fall, and interest rate differentials would narrow, commodities would also decline.  A reversal of the current trends. If the yen were to strengthen and commodities fall, then we are likely to see a recovering trade surplus as well as an even healthier current account surplus. This structural inflow should push the Yen higher.

The yen has not followed its traditional “safe haven” pattern this year. Typically, this strengthening is caused by Japanese investors repatriating their capital in times of great risk and stress. This adds to the already substantial natural inflows caused by trade that are currently recycled. The Ukrainian war has not, yet, triggered that kind of extreme risk aversion.

Given our view that the Yen is most likely cheap with several credible catalysts for it to re-rate stronger over the next year how does this impact our portfolio positioning?

The short answer is not very much! We are quite aware of our (and anyone’s) limitations as currency forecasters (see this year’s ‘stability’ assumption!) and ascribe our views a low weighting compared to what we do have more competence in – business analysis, valuation, and catalysts.  We do not want to own stocks that require a weak Yen to be competitive – but this was also true at 110. What we have done is exploit the recent weakness in some ‘domestic’ stocks that have been driven further from intrinsic value and that we think could be beneficiaries of a competitive Yen but where they have other catalysts. Examples include Matsukiyococokara (3088) a drug store chain that usually has high exposure to international tourism. Our position will benefit greatly from a re-opening of tourism after COVID. A cheap Yen just makes Japan even more attractive to visit.  We have also added to some firms with large international operating divisions where the Yen weakness will increase the visibility of these higher growth and higher margin segments whilst pushing group numbers sharply higher such as T Hasegawa (4958). Our weighting in banks (8306, 8366, 8369) benefits from higher rates globally and would be major beneficiary of a steeper Japanese yield curve were it to happen.

From the current multi decade levels of cheapness we think the Yen offers an intriguing optionality. Whilst of course it CAN go lower carried by momentum it is already stretching the mean reversion boundaries from fair value very hard. If it stays low then many stocks will record fantastic profits and earnings revisions will stay very healthy given their current FX assumptions. The market cannot on one hand argue that the FX will weaken dramatically and not also see how this helps earnings in the market. Whilst, if the Yen strengthens then we will benefit as owners of Yen assets.  When the Yen turns, we would expect the move to be abrupt.  Our own positions in the fund have suffered from the weakening Yen this year. We remain happy owners of Yen assets – especially OUR Yen assets - and regard the current situation as offering a double discount. The first on the intrinsic value of the currency and a second on the intrinsic value of our holdings. Changes in monetary policy regimes are fraught with turbulence – we like the optionality of a very cheapy valued currency, skewed positioning, and a lopsided consensus with several potential triggers for a reassessment.

This document has been prepared by Zennor Asset Management LLP (“Zennor”), which is authorised and regulated by the Financial Conduct Authority in the conduct of investment business. This update is issued by Zennor on behalf of the IUP Zennor Japan Fund (the “fund”), formerly Prodigy Japan Fund until 20 September 2021, for the information of eligible recipients. Retail clients should not rely on this performance update. Past performance is not necessarily a guide to the future. The value of shares in the Fund and the income derived therefrom may go down as well as up.

This document is for illustrative purposes only and does not form part of any Key Investor Information Document. The information contained in this document does not constitute investment advice or an offer or solicitation to buy or sell any investment, fund or other security. The information and opinions contained in this document have been compiled, or arrived at, from sources believed to be reliable and in good faith, but no representation or warranty, express or implied, is made to their accuracy, completeness or correctness. Any data, research, analysis, opinions or other information published in this document is provided as general commentary and for commercial communication purposes only and represents the views of Zennor at the time of preparation and may be subject to change. Zennor have taken all reasonable care to ensure the information contained and stated herein is accurate and reliable but make no representation, guarantee, or warranty that it is wholly accurate and complete. The information contained herein has not been independently verified and no liability is assumed by Zennor for any direct, indirect, or consequential losses arising from its use. Returns are unaudited. Details of the fund can be found at www.independentucits.com.

The Fund has appointed as Swiss Representative Waystone Fund Services (Switzerland) SA, Av. Villamont 17, 1005 Lausanne, Switzerland, Tel: +41 21 311 17 77, switzerland@waystone.com. The Fund’s Swiss paying agent is Banque Cantonale de Genève. In respect of the Shares distributed in or from Switzerland, the place of performance and jurisdiction is at the registered office of the Swiss Representative.

A long-only Japan fund investing across the market cap spectrum, seeking firms who have been undervalued and underanalysed by the market.