The Bank of Japan’s ability to Surprise

The Bank of Japan surprised the markets at midday Tokyo time with an announcement that they would increase JGB purchases from ¥7.3 Trillion to ¥9 Trillion per month. They also announced a widening  of the range for YCC (yield curve control) from 0.25% to 0.5%. In essence the BOJ will purchase bonds up to a yield of 0.5% through fixed rate operations. The BOJ implied in their statement that the bond market had become “dysfunctional”, with the central bank now owning over half of the outstanding stock of JGB’s. When Mr Kuroda took on the role, as BOJ governor  the ownership was only 11%. This has meant that liquidity in the bond market has dried up.

So is it a rate hike? Yes and no! Whilst not the end of yield curve control, it sets the stage for an exit and return to normalised policy under a new governor in the spring when Mr Kuroda exits. Japan’s core inflation recently printed at 3.9% but much of this is cost push inflation. Despite the tight labour market Japan has not witnessed US style wage growth. Total compensation is running at about +1.5% versus well over 5% in the US. Why is this? Firstly, productivity gains have proved elusive, and Japan has seen significant “underinvestment”. Also, changing a deflationary mindset amongst corporates has proved very difficult. There are signs of wage hikes, but it is not across the board. The effect on the ten-year yield today was dramatic. 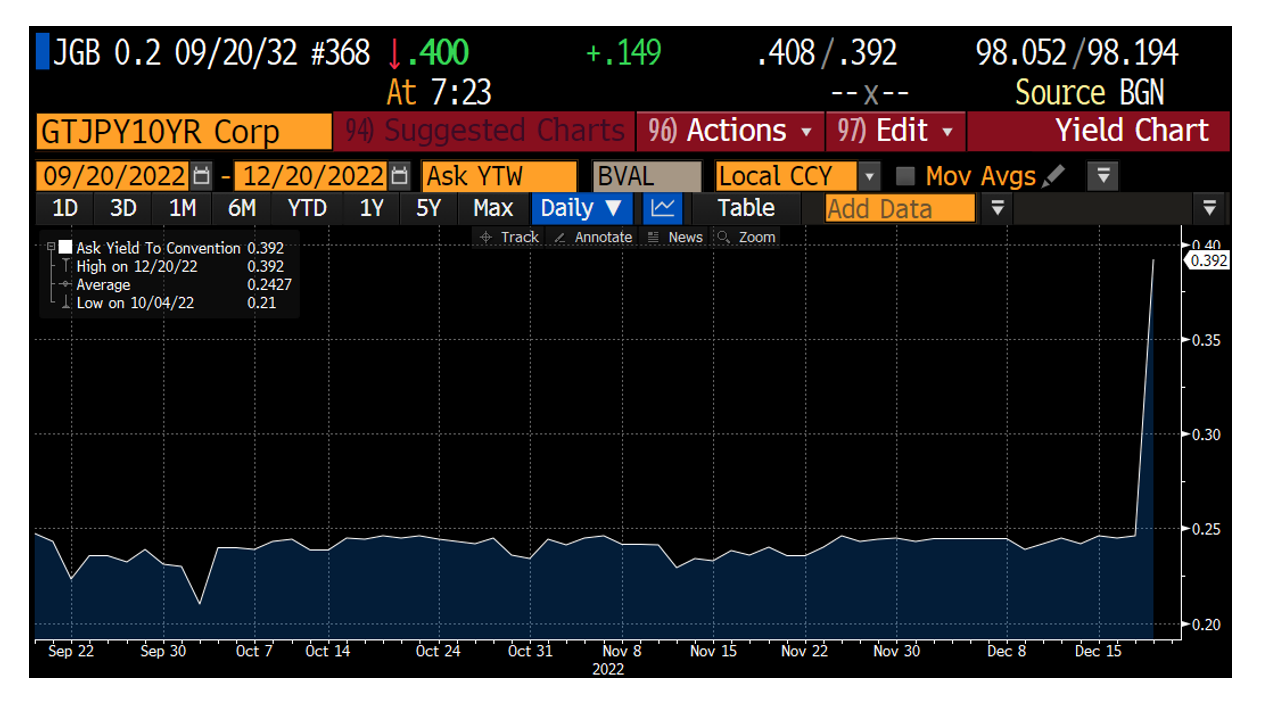 The move has also led to sharp falls in bond prices in developed markets. We come back again to 1998. Its all about positioning and investors are both underweight in Japanese equities but also in the wrong sectors. In 1998 we witnessed a dramatic move in the Yen/Sterling from ¥160/£1 to ¥130/£1 very quickly. Whilst this may not be quite as dramatic expect a further rise in the yen in the short term and the beginning of the unwind of short yen trades which like technology last year were seen as a one way bet.

How much has been priced in? A degree but we suspect that what is certainly not priced in is eventual normalisation under a new Governor. Foreign investors put $250bn into Japan post Mr Abe’s “Three Arrows” announcement in 2012 and then proceeded to take out everything. The weakening yen has been a good excuse to leave Japan as an asset class. The below chart highlights that this year alone the foreigner has sold $40bn worth of equities. 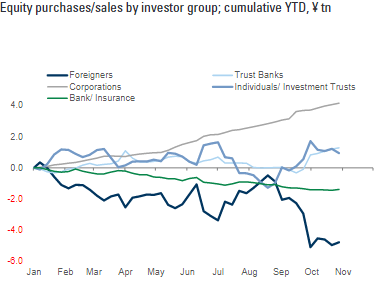 Only occasionally do we write on macro events in Japan but we have argued that the Yen was trading very cheaply on PPP and that even small changes in relative monetary policy between Japan and the US could cause a substantial appreciation towards a fair value of around ¥100/$1. In this context the recent move from ¥153/$1 to ¥132/$1 can be seen as anticipating this kind of policy regime change.

The stocks we own are primarily domestic in orientation and the portfolio should be a beneficiary of a stronger yen. This is less true of the market that has many global businesses. With a new catalyst we are going to further reduce companies with excessive export exposure and add some more domestic demand beneficiaries, which have been casualties of a weakening yen. We are exposed to the financial sector where our balance sheet reform beneficiaries include Kyoto, Shiga, Aichi, and Iwate Banks. These should be beneficiaries of a more benign interest rate environment. They trade at exceptionally low multiples of book and we hope to see an uptick in the domestic loan spread business in time.

We had thought that the spring would be most likely for an announcement but the Bank of Japan have a habit of surprising as they did on Christmas day 1989 (Mr Mieno). The Zennor portfolio is well placed for this move. Given how many participants have closed their books further portfolio positioning is entirely plausible.

This document has been prepared by Zennor Asset Management LLP (“Zennor”), which is authorised and regulated by the Financial Conduct Authority in the conduct of investment business. This update is issued by Zennor on behalf of the IUP Zennor Japan Fund (the “fund”) for the information of eligible recipients. Retail clients should not rely on this performance update. Past performance is not necessarily a guide to the future. The value of shares in the Fund and the income derived therefrom may go down as well as up.

This document is for illustrative purposes only and does not form part of any Key Investor Information Document. The information contained in this document does not constitute investment advice or an offer or solicitation to buy or sell any investment, fund or other security. The information and opinions contained in this document have been compiled, or arrived at, from sources believed to be reliable and in good faith, but no representation or warranty, express or implied, is made to their accuracy, completeness or correctness. Any data, research, analysis, opinions or other information published in this document is provided as general commentary and for commercial communication purposes only and represents the views of Zennor at the time of preparation and may be subject to change. Zennor have taken all reasonable care to ensure the information contained and stated herein is accurate and reliable but make no representation, guarantee, or warranty that it is wholly accurate and complete. The information contained herein has not been independently verified and no liability is assumed by Zennor for any direct, indirect, or consequential losses arising from its use. Returns are unaudited. Details of the fund can be found at www.independentucits.com.

The Fund has appointed as Swiss Representative Waystone Fund Services (Switzerland) SA, Av. Villamont 17, 1005Lausanne, Switzerland, Tel: +41 21 311 17 77, switzerland@waystone.com. The Fund’s Swiss paying agent is Banque Cantonale de Genève. In respect of the Shares distributed in or from Switzerland, the place of performance and jurisdiction is at the registered office of the Swiss Representative.

A long-only Japan fund investing across the market cap spectrum, seeking firms who have been undervalued and underanalysed by the market.